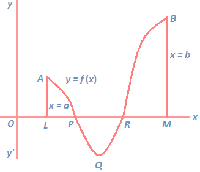 Geometrical Interpretation of definite Integral If f(x) > 0 for all x ϵ [a, b] then is numerical equal to the area bounded by the curve y = f(x) then x-axis and the straight lines x = a and x = b. = Area LAMB. In general, represented an algebraic sum of the areas of Read more about Geometrical Interpretation of definite Integral[…]