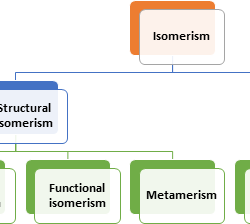 Isomerism Isomerism  is a phenomenon shown by two or more organic compounds having the same molecular formula but different properties due to difference in arrangement of atoms along the carbon skeleton (structural isomerism) or in space (Stereo isomerism) Structural isomerism 1. Chain isomerism: These isomers arise because of the possibility of branching in carbon chains. Read more about Isomerism[…]