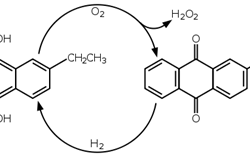 It is also called as oxygenated water (H2O – O) In its pure form it is a colorless liquid, slightly more viscous than water Structure:  Hydrogen peroxide (H2O2) is a non-planar molecule. It has half opened book structure. Two oxygen atoms lying on spine of the book with O – O peroxy linkage and 2 ‘H’ atoms on each leaf of Read more about Hydrogen peroxide (H2O2)[…]